You stumbled across the home page of Lennart Benschop.

You can send me mail at the address lennartb at xs4all dot nospam nl with "nospam" removed. Start the subject with the words "Your homepage". All other mail from unknown senders will be deleted. Sorry I have to do this, there is too much spam.

This is yet another boring homepage of yet another boring person. I don't even have kids or a lousy dog to show. It doesn't matter if you have a Down Level Browser (i.e. anything that doesn't have all the whiz-bang features of the latest version of the Microsnot Internerd Exploder). This page is boring, regardless of the browser you use. It goes without saying that this lousy page is permanently under construction.

Recently I had quite some fun with the Cerberus 2080 computer. I implemented graphics functions that can be used with BBC Basic. See the story here.

I updated the BASIC page and I intend to add more stuff to it. The first significant addition is a discussion of a simple progrom to generate an interesting pattern on the computer screen. Next see one of the first programs I ever wrote, to compute the day of the week. for any given date.

I compared two other popular portable world band radios, the Tecsun PL680 and the Tecsun S8800,

Added an article about Wadley loop radios. the The Wadley Loop,

I posted the Spectrum Forth83, which I wrote back in 1988. The user manual is added and annotated source code is provided. See my Forth page.

I'm starting a weekly column about Coreboot, the free alternative to PC BIOS.

Some thoughts about music fingerprinting

See the Linux related section, at the moment there is an article about creating bootable diskettes for small machines.

See my Freedom page for a bit of true American freedom propaganda.

I also have some Stuff in Dutch

Even the most boring person has got to have some hobbies, even if it's just picking one's nose. Even though I pick my nose once in a while, I don't consider it one of my hobbies. I do consider the following things my hobbies:

Sometimes one has to work to finance one's hobbies. At the moment I work at Verimatrix in Vught (The Netherlands), that designs cryptographic chips and software. This division of Verimatrix was formerly knowm as INSIDE Secure. This division of INSIDE Secure was formerly part of AuthenTec, it was part of SafeNet before that and originally it was part of Pijnenburg BV. So I have five employers on my CV, but all in the same job and the same building.

Before I started to work there, I studied at the Eindhoven University of Technology. I received my Ph.D. on Tuesday 2 December 1997. Download my Ph.D. thesis (in PostScript) here.

When I'm not killing my brain with beer or spoiling my ears with André Popp, I could be working on some of my pet programs. Here are a few:

See also my Kvikkalkul page. Do not forget to pay a visit to the Retrocomputing Museum as well.

I told you I don't have kids or a dog, but I do have some plastic lunchboxes to show to the world. These are of the Belgian brand DBP Plastics and have essentially been in production since the invention of plastics. They don't change the model each year, but they do change the colors from time to time. 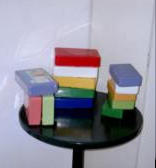