Two of the best portable world band receivers currently available are the Sony ICF-SW7600GR and the Sangean ATS-909X. Both have a general coverage shortwave range and have SSB, so they can be used to listen to amateur transmissions. Another interesting radio is the Tecsun PL-660, which I do not have. It is cheaper than the other two and it combines sync detection with a rotary tuning knob, an interesting combination.

The Sony ICF-SW7600GR is the latest (and probably the last) portable shortwave receiver from Sony. It was introduced in 2001, about 11 years ago. Its predecessor (the ICF-SW7600G, introduced in 1994) has fewer presets, but is otherwise nearly identical, so this radio is 18 year old technology. I bought mine in 2005 and it has served me well for the last six years. 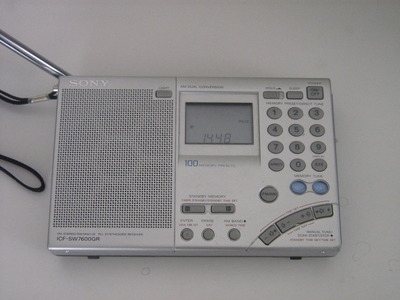 The Sangean ATS-909X was introduced in 2010. It's a make-over of the ATS-909, introduced in 1995. The make-over is technical as well as cosmetic, but the feature set has remained nearly identical. I bought this radio in 2012, to get some features that I miss on the Sony and to compare the two radios. 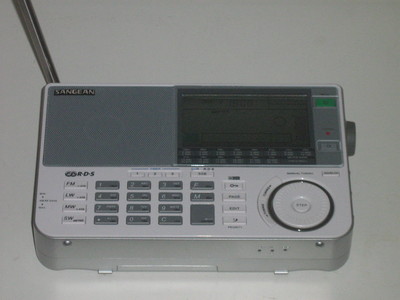 Both radios cover the entire radio spectrum from longwave to 30MHz with no gaps, plus the FM broadcast band. My version of the Sangean starts at 100kHz and includes the extended (Japanese) FM band, but there are versions with different coverage. They can both receive SSB, both have FM stereo (headphones or line output) and both have an external antenna input. The Sangean is a bit larger and heavier than the Sony.

Further, the Sangean is clearly less sensitive on its internal whip than the Sony on the lower shortwave bands (say below 10MHz). This difference was clearly noticeable on the 49m broadcast band (daytime), as well as the 80m and 40m amateur bands. This difference does not exist on 20m and 15m. Of course you can hook up a few meters of wire to get more signal into the radio, but this is a portable. Soon I will visit a fellow ham who has professional test equipment, so I can provide hard figures.

On to SSB. Both radios have selectable sideband (separate settings for LSB and USB), which is good. The Sony tunes in steps of 1kHz, but it has an analog fine tuning control. The Sangean on the other hand, can tune in 40Hz steps (as well as 1kHz steps). With an analog control you can tune arbitrarily close to the correct frequency, where the Sangean leaves you with a frequency error up to 20Hz. On the other hand, achieving superior accuracy is not easy with an analog control, certainly not if the control potmeter wears out or gets dirty. Anyway, I prefer the Sangean for SSB tuning. Neither of these radios is a real match for my Lowe HF-225 though.

On FM the Sangean really shines. Not only does the Sangean have RDS (which the Sony lacks), it can also receive more weak and distant stations (the Sony is certainly not bad in this department either). The Sony tends to overload in urban environments with strong local stations, the Sangean doesn't. Add to this the better sound quality and the rotary tuning knob of the Sangean and then you know what is the more desirable radio on this band.

What I really missed on the Sony was a rotary tuning knob. The Sangean has it, but I really wish they used a better one. It does not feel very solid and the mechanical 'clicks' are not perfectly aligned with the electrical steps. So sometimes the control falls back to the previous step. Give me the tuning knob of the Lowe HF-225 any time! That one does 200 steps per revolution and it feels exactly like continuous analog tuning. By the way: the encoder in the Sangean has 32 steps per revolution, which is better than most mechanical encoders, that have only 20.

The Sony on the other hand, uses two pairs of up/down buttons. The inner ones tune in 1kHz steps and they do not mute when held down. This way you can tune across the band while hearing what is going on. This makes it more or less usable on the amateur bands, but it is certainly not ideal.

Next I will discuss preset stations. The Sony has 'only' 100 of them, divided in 10 pages of 10 each. Each preset can be in any band, so you can mix FM and AM stations in one page. So in the Netherlands, you have Radio 1-4 on FM and Radio 5 on mediumwave, which you can program under presets 1-5 on one page. You don't have separate ranges of presets for VHF and for UHF on your TV set either, do you?

Well, the Sangean has separate pages of presets for longwave, mediumwave, shortwave and FM. This feature is partly a by-product of the feature that gave the entire line of Sangean world band receivers its name: ATS or Automatic Tuning System. So you can press a button and the radio scans the entire band (longwave, mediumwave or FM) and stores the 9 (longwave), 18 (mediumwave) or 27 (FM) strongest stations in the available presets for that band. The bad news is: you will overwrite any and all presets for that band as soon as you use ATS. If you took the trouble to store all of your favorite FM stations in your home town under convenient preset numbers, you will lose that if you use ATS when you are on holiday. The FM band has three pages of presets, mediumwave has two. Now if you tune around manually, the selected page switches as soon as you stumble across a frequency that is stored in another page. So before selecting a preset, you have to look at the display, see that the selected page is 3 and then press the PAGE button to go back to page 1.

On shortwave you have pages too, 39 of them, nine presets per page (why not ten, there are ten digit keys?) The radio comes preloaded with lots of shortwave frequencies, many of these stations no longer transmit on shortwave. You can assign names to shortwave pages (and to individual stations in other bands), SMS-style. I'm too lazy for that. If you enter a frequency directly via the numeric keypad and this happens to be a frequency stored on a named page, this name will be shown in the display and it will stay there until you select another named page, even if you tune away from that frequency. How stupid is that?

The keys on the Sangean are large (larger than necessary), but their tactile quality is not what I would expect. Occasionally it misses a keypress (less if you press firmly), so it is not possible to touch type on the keypad. On the Sony this is no problem at all. The lock switch on the Sangean is just a key on the keypad (press again to unlock), on the Sony it is a real switch, which is IMHO more reliable.

Timers on radios. Most of the time I find it more trouble to set them than it's worth. That said: I did learn to use the timers on my Sony and I do use it as an alarm clock occasionally, especially when I am on holiday. I probably should use the timers on the Sangean too. But who needs a world time clock with time zones of 42 cities in a radio?

The display of the Sangean is large, clear, nice backlight too, but using 14-segment displays for the RDS station name, that looks a bit like an anachronism to me.

Both radios work well with rechargeable batteries. Both need 4 AA batteries. Both have an input for external power, but the Sony does not come with a mains adapter, the Sangean does. The output of this adapter is 9V AC (the manual states with negative center connection, What? for AC?).

I have not measured it, but apparently the Sangean uses more power than the Sony and it will last shorter on the same set of batteries. On the plus side, the Sangean includes an internal battery charger. This is not just any old stupid slow charger either, but it is a fast charger with automatic shutoff, I think dV/dt detection. But the manual does not tell you that!

Both the Sony ICF-SW7600GR and the Sangean ATS-909X are great radios. But I don't think they are great enough. I think he Sony was great at the time when it was introduced 11 years ago, but you could not accuse it of being very innovative. That blame is to be put on the ICF-2001D (ICF-2010 in the USA), which was introduced in 1985, the first consumer radio with a synchronous detector and an improvement over many of its successors. In 1994 that synchronous detector went into their "low budget" line, the SW7600 series that has only a single IF filter, no rotary tuning knob and no signal strength indicator.

I do think that Sangean really missed the opportunity to make the new model at least as good as the Sony in every respect. This means improved sensitivity on the lower shortwave bands, better tactile quality of the keypad and of course a synchronous detector. And with DSP technology they could have done so much more, possibly even DRM demodulation.

What I miss on both of them: